Frustration in magnetism is usually characterised by the inability of a system to condense into an ordered state, even well below the temperature range of the magnetic interactions.  This reflects the presence, at the classical level, of a large ground-state degeneracy, which prevents the system from choosing a unique ground state. Among the frustrated compounds belonging to the extensively studied rare-earth pyrochlore family, the case of Er2Sn2O7 was up to now unsolved, as the predicted first-order transition to a long-range Palmer-Chalker antiferromagnetic structure had never been observed. 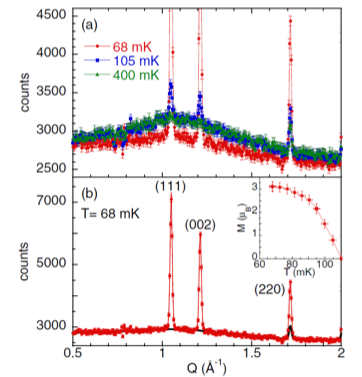 Recent neutron scattering and magnetisation measurements performed down to 60 mK actually show that Er2Sn2O7does order in the Palmer-Chalker state, at a Néel temperature TNof about 108 mK (Figure).  Extreme care was taken to ensure a proper thermalisation of the sample, a crucial issue to the successful observation of magnetic Bragg peaks.  The latter develop on top of a broad diffuse scattering signal, which disappears progressively as the ordered magnetic moment increases, indicating a second-order transition.  In addition, ac susceptibility measurements show slow dynamics above and below the magnetic transition.  The characteristic energy barrier of these slow dynamics is smaller than the gap of the Palmer-Chalker state, and is associated with spins at domain boundaries.  The magnetic exchange parameters, refined from a modelling of the spin excitation spectrum in an applied magnetic field of 2T, further confirm that Er2Sn2O7 is a realisation of the dipolar XYpyrochlore antiferromagnet.

The absence of a first-order transition, however, along with multiscale dynamics, are signatures of a rather unconventionnal magnetic state, in particular with respect to the more isotropic Gd2Sn2O7.  Further calculations, accounting for the strong XYanisotropy of the Er3+magnetic moment and for the long-range dipolar interactions, which are known to weaken the stability of the Palmer-Chalker state, are needed to better understand the origin of the observed enhanced fluctuations, and may enlighten the existence of exotic excitations, such as lines of vortices.