The discovery of two-dimensional electron gases (2DEGs) on the interfaces between insulating transition metal oxides (TMOs) signaled the beginning of an intense scientific effort to use their numerous functionalities in the emerging field of oxide electronics. After being observed at the bare surfaces of TMOs, such 2DEGs became accessible to surface-sensitive experimental techniques.However, 2DEGs on both interfaces and surfaces fail to meet fundamental requirements before functionalization is envisaged. A device-friendly fabrication route of 2DEGs on TMOs, which is based on the thermal evaporation of a reducing agent on oxide surfaces, has recently come as the solution to this problem. 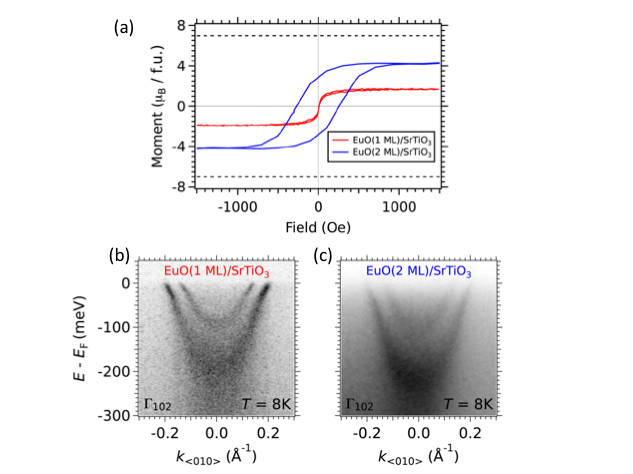 During the 2DEG2USE project, we have successfully created a 2DEG at the interface between EuO -a ferromagnetic insulator- and SrTiO3 -a non-magnetic bulk-insulating TMO that is considered to be a prime candidate platform for oxide electronics-. This functional interface has been created through the thermal evopartion of Eu on SrTiO3, i.e. by following the aforementioned device-friendly fabrication protocol. We have used Angle-Resolved PhotoEmission Spectroscopy (ARPES) to probe the electronic structure of the interface, and magnetization measurments to confirm the ferromagnetic character of the EuO overlayer.

Pure metallic Eu is evaporated on a clean SrTiO3substrate by means of a Knudsen cell. The redox reaction reduces the SrTiO3 surface, thereby creating a metallic 2DEG and a EuO overlayer. Depending on its thickness, the overlayer can be either paramagnetic (1ML) or ferromagnetic (2ML) as shown by the in-plane magnetization curves in Fig. 1(a). The electronic structure of the 2DEG is shown in Figs. 1(b) and 1(c) when the overlayer thickness is, respectively, 1ML and 2ML. The parabolic electronic states correspond to surface-confined electrons that induce the metallic character of the interface.

Our results open new perspectives for investigating the interaction of the well-known 2DEG on SrTiO3 with magnetism, and prove that the new device-friendly growth technique can be used to enhance the functionalities of future all-oxide devices.